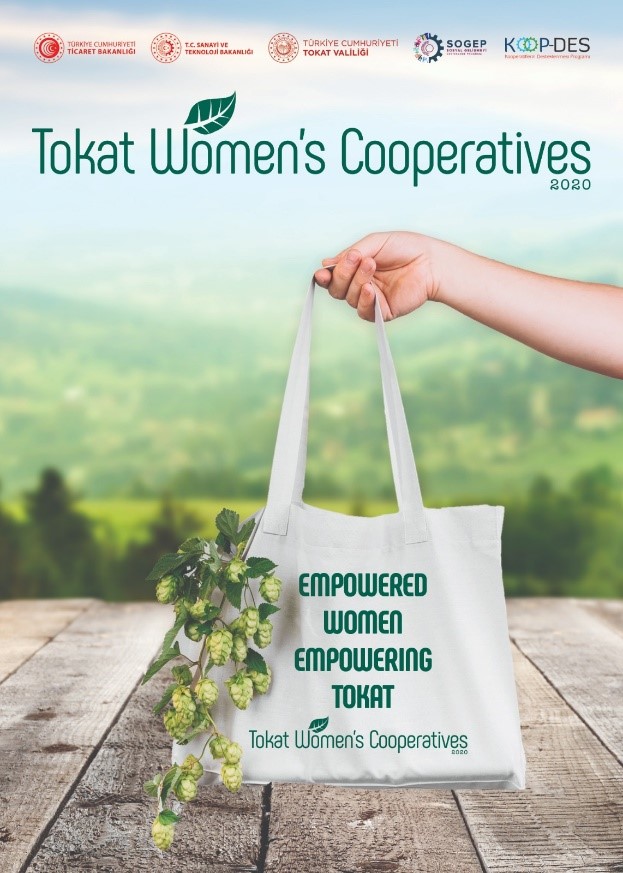 Women’s Cooperatives which were established in 2019 in Tokat, Turkey will be an amazing success story bringing local and national stakeholders together.

Despite many social boundaries and economic obstacles cooperatives play a major self-helprole in rural areas, particularly in providing opportunities for productive employment, as well as offering market access, while giving a stronger “voice” to rural groups.

Tokat is an important agricultural city in the Middle Black Sea Region of Turkey with apopulation of approximately 600,000 inhabitants. In the fertile geography of Tokat province with a special climate structure 80 different kinds of agricultural products can be grown. Including Tokat Narince Brine Vine Leaf, Erbaa Narince Vineyard Leaf, Zile Molasses and Churchkela, Turhal Yogurtmac Bread, Niksar Walnut which are geographically indicated products at national level.

The "Empowered Women, Empowering Tokat Project" which aims to increase the product qualitystandards of local food products in accordance with food safety and to ensure that they get the real value they deserve in the market; to notice hidden women's labour by encouraging them to participate in economic life; matching the traditional skills of producers with technology and to spread production period of food products throughout the year, was developed and put into practice under the leadership of the Tokat Governorship and the guidance of the Middle Black Sea Development Agency (OKA) Tokat Investment Support Office. More than these decision making actors the women living in the villages of Tokathave committed to developing a long-term vision for their land and their labour.

This inclusive and resounding project was launched in June 2019 within the framework of five main axes; the establishment of cooperatives and manufacturing plants, brand development activities, training activities promotion and marketing activities.

Following the awareness activities in June 2019 aimed at spreading women's cooperatives; between July 2019 and May 2020, official establishment procedures of women'scooperatives have been completed with the participation of 100 women members in 12 districts of Tokat.

These women’s cooperatives movement passed to another stage after the approval of two projects with a total budget of 4.1 million Turkish liras (approx. €0.5 million). Ministry of Science&Technology and Ministry of Trade decided support the establishment of manufacturing facilities in 14 women's cooperatives in order to provide an access to national and international food Novproducing and marketing quality standards. In addition to these big scale projects the technical assistance projects of "Branding of Tokat Province Women's Cooperatives" and "Establishment of Tokat Province Women's Cooperatives E-Commerce System" projects are financed and implemented by Middle Black Sea Development Agency which contributed to institutional capacity of these cooperatives.

As aconclusion, these set of projects appeared in the hearths of Anatolia refers tothe revival of terms “development” and “prosperity”. The Women’s Cooperatives in Tokat will be a mean to facilitate engaging in food processing, there by allowing their members to access and benefit from higher value-added markets.