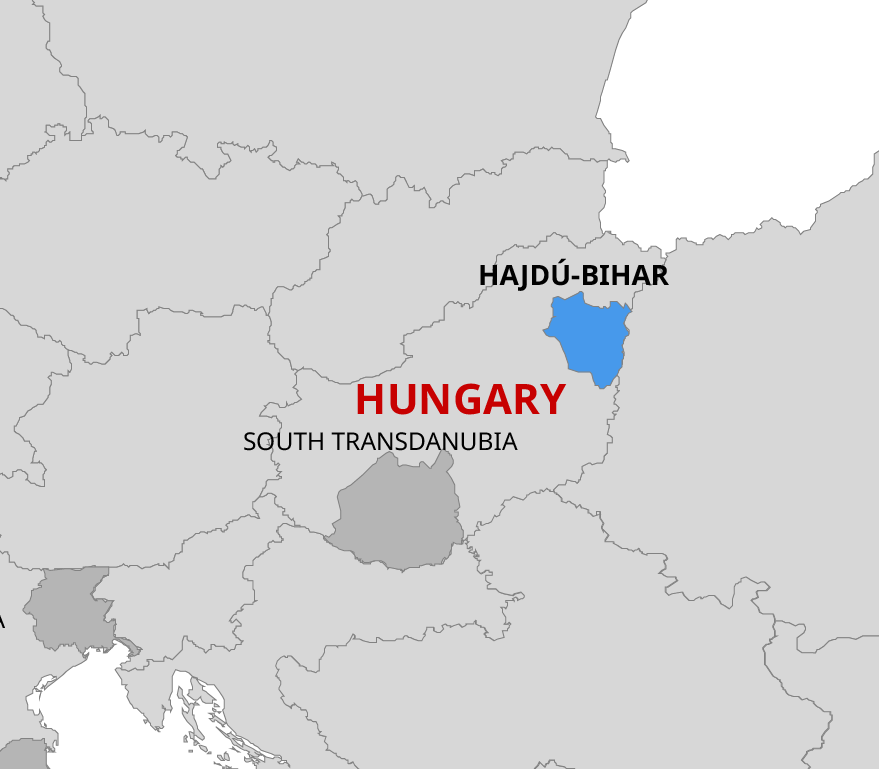 Hajdú-Bihar County (NUTS III) is located in the Great Plain in Eastern Hungary as part of the Northern Great Plain Region (NUTS II).  Due to its location within Hungary, the county is in a peripheral position but considering the past decade, it started to play an increasingly strong regional central role affecting not only neighbouring counties but also cross-border areas. In terms of its economy, agriculture is a driving force, but in recent years, industry has also provided outstanding performance.

Covering an area of 6,211 km2, the county has 82 settlements and a resident population of about 527,000. The county's most populous city is the county seat. Debrecen, the second largest and most populous city in Hungary, is the seat of Hajdú-Bihar county and the Debrecen micro-region. About 38.2 percent of the county lives in this city. Debrecen is the largest and most significant city in the Trans-Tisza region. The population density - 85 inh/km2 - is significantly lower than the national average.

The size of the agricultural area in the county is 531,700 ha, it is the most significant natural resource of the county.

The role of agriculture is above average, and as a county with favourable conditions, it is one of the leading agricultural producers in the country. Most of the cultivated area is arable land (50%), while the size of 20% grassland and 10% forest is also significant.

There is an outstanding significance of livestock and agricultural products related to livestock industry. It is the second largest county in terms of gross value added in agriculture.

The economy of Hajdú-Bihar has traditionally been based on agriculture and the food industry. This area will continue to appear strongly in the economic structure of the county. The natural conditions that benefit agriculture enable the production of high value-added, internationally competitive, healthy foods, supported by appropriate research and development.

At the same time, the economic developments and new investments of recent years have resulted in the strengthening of the pharmaceutical industry, which is also traditionally present, and the emergence of new sectors (sectors related to the manufacture of transport machinery, especially the automotive industry).

Due to recent developments, S3 sectoral priorities has become more focused: the areas of healthy society and well-being, healthy and local food as well as agro-innovation are of special importance.

Hajdú-Bihar County Government works in strong cooperation with relevant professional bodies like the County Directorate of National Chamber of Agriculture and the University of Debrecen.

The university is a pioneer in Hungarian cluster organization and one of those universities among higher education institutions that plays the largest role in the establishment and operation of clusters. The objective of the institution is to make technology transfer more effective which, in turn, can contribute to economic development in the region.

One of the clusters initiated by the university is the Pharmapolis Innovative Food Industry Cluster, that is a network of legal entities and people aiming at increasing the added value along the value chain of health industry, health tourism, or performing complementary activities closely related to or associated with this industry. The objectives of the cluster include the strengthening of the Hungarian health industry innovation chain and developing and operating technological platforms competitive even on a global level, and its activities are focused on the development, production and marketing of functional foods.

EUREGA’s main objective is to have food, food habits and gastronomy included and recognised in EU, regional and national strategies and policies. These should be seen both as a cultural asset and strong element in regional cultural identity and as a necessary tool to boost sustainable products and services.

‍SinCE-AFC aims at involving SMEs of the Agri-Food chain in circular economy through the promotion of the appropriate managing and financial horizontal mechanisms. All the Agri-Food agents committed to production, processing, packaging, distribution and final consumption are expected to operate in a coordinated way to better adapt to circular economy.