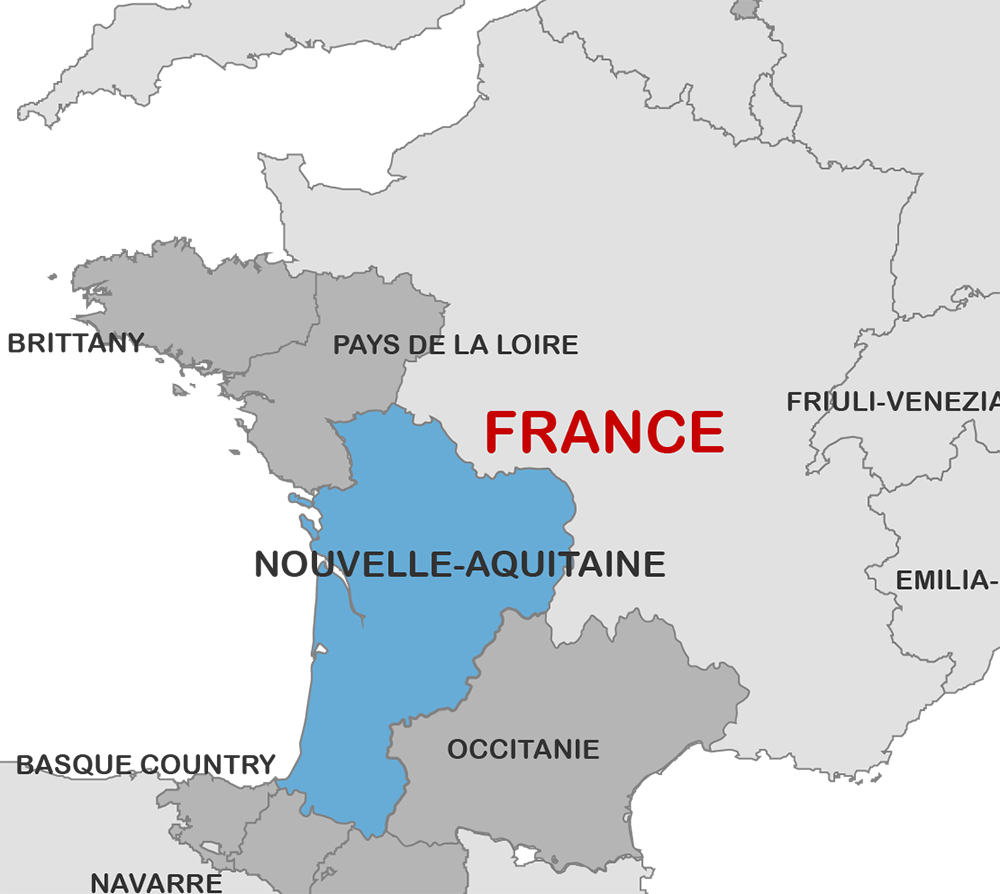 The second largest agricultural region in Europe in terms of the value of its production (10 billion euros in 2017), Nouvelle-Aquitaine has nearly 120,000 agricultural jobs and around 54 000 jobs in the agrifood sector.

The agricultural sector relies on very diversified medium and large farms, which are valuable sources of local employment and territorial cohesion.

With more than 200 products under official signs of quality and origin, the agricultural sector of Nouvelle-Aquitaine stands out as the European leader in quality, integrating an organic farming in constant progression. Complementing livestock farming (sheep, goats, cows and ducks), vegetable production and cereal production (9 million tons produced annually), vine products represent more than a quarter of the Region's agricultural production.

Vitirev has been an important project to launch practices for pesticides’s reduction and the integration of green practices, and could be replicated to other agricultural sectors. Nouvelle-Aquitaine is also the first oyster-producing region in France. Fishing and aquaculture are important activities on its coast.

In 2019, the Regional Council adopted its Roadmap on green Transition. The second pillar is dedicated to the acceleration and the support of the agroecological transition. Several actions have been launched or are planned to develop new economic models, reduce the use of pesticides, increase organic production, or support green practices.

In June 2019, the Region launched its Neo Terra roadmap, in favor of an energy and ecological transition based on three objectives:

The digital transition of companies

The digital transition is the first of the cross-cutting priorities included in the Region's action plan. In France, 9 out of 10 SMEs (small and medium-sized enterprises) say they are concerned about digital technology, which continues to disrupt the entire economy. The  digital sector is a priority sector in Nouvelle-Aquitaine. And at the level of companies, the regional public authorities have already anticipated the digital revolution with the creation of assistance programs, such as the Factory of the Future Programmes, for the digitalization of companies.

The Region's support takes the form of aid for digital transformation (including the digital transformation vouchers) or aid for digital prototyping, which is essential to start projects with few initial resources. Like in other European Regions, a Digital Innovation Hubs is currently being set up in Nouvelle-Aquitaine. The regional hub, called DIHNAMIC, will focus on Artificial intelligence and will benefit all interested companies in the different fields of the economy.

The S3 takes place on the Region in complementarity with the SRDEII and SRESRI:

SRDEII: Regional Plan for Economic Development of Innovation and Internationalization

The roadmap to support the economic development in the Region including the digital transformation for the main supply chains of Nouvelle-Aquitaine.

The first of the 11 priority sectors listed in the Regional Plan targets the agrofood industries and the agricultural sectors.

SRESRI: Regional Plan for Higher Education, Research and Innovation defines the priorities for the intervention and the orientations shared by all the actors. It aims at connecting and supporting the efforts and works of the regional R&I players.

Digital Economy represents around 60 000 jobs in Nouvelle-Aquitaine. Many of the stakeholders are small or micro-companies. The Region can rely on three clusters: Digital Aquitaine, SPN and Aliptic, and a competence centre for the development of open-source softwares and technologies.

Would you like to find out more Nouvelle-Aquitaine region?

DIVA has received an award for innovation in France