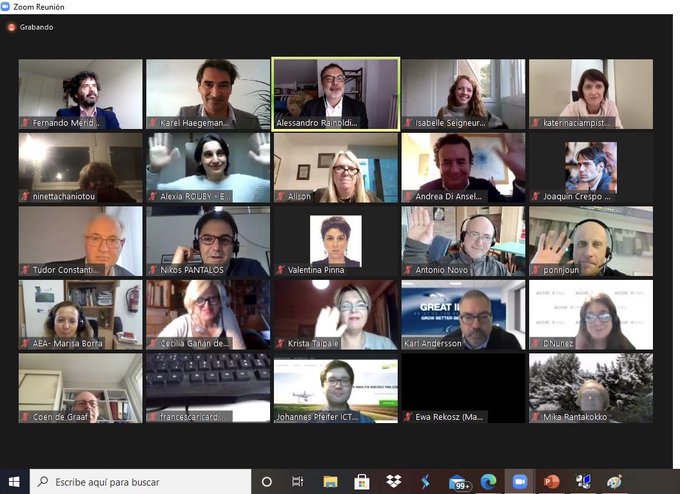 The 18th. of December, a joint online event was organised by the Joint Research Centre of the European Commission with all the Thematic Smart Specialisation Partnerships members of the S3 Platforms for Agri-Food, Industrial Modernisation and Energy. Our Traceability and Big Data S3 Partnership participated in this meeting and had the opportunity to listen, in first place, to the lessons learnt in the development of the Pilot Action for Interregional Innovation Projects in which the TBD Partnership had the opportunity to participate with the interregional business case “Complat”.

Among the main findings shared by the two experts who coordinated this initiative, Alison Hunter and Pierre Padilla, a central idea was highlighted: the cross-regional rationale has been present in all the cases participating in this initiative and has shown the importance of the interregional dimension in the construction of valuable business plans. This Pilot Action has also confirmed the key notion of combining ecosystems as a core aspect of the new interregional dimension in the European Regional Policy; the new role for less-advanced regions; and the need for a stronger demonstration of market orientation.

As some of the policy implications, different expectations and perceptions of “success” have appeared; as well as a general deficit in domestic political commitment and financial investment- know-how in most of the regions; together with the confirmation of the need for reducing fragmentation in the post 2020 EU context.

At the end, it was recognized that the preparation of partnerships and regions for the creation of these new I3 (interregional innovation investments) is an investment in itself.

Isabelle Seigneur, from the JRC, presented then a brief overview of S3 interregional partnerships and a new self-assessment toolbox created by the JRC. After this presentation, three new Partnerships were introduced: one regarding Cultural and Creative Regional Ecosystems; a second one on Berries; and a third one on Wireless ICT partnership (with which our Partnership might identify some synergies).

The second session of this event was dedicated to the new programming period in industrial modernisation, agri-food sector and energy. Peter Berkowitz, from DG REGIO, commented on the status of the negotiations for the Multiannual Financial Framework (MFF) and the new initiative I3 (Interregional Innovation Investments), as well as about the COVID-19 Response and Recovery Partnerships Calls. In relation with the new I3 instrument, the Council and the Parliament has reached a common understanding on its budget (ERDF); on the necessity to establish synergies with other EU programs (especially with Interreg C); and on the third countries participation in this initiative. M. Berkowitz highlighted, as a lesson learnt by the EC in the development of the Pilot Action, that the transition from S3 Partnerships to the projects’ scale-up stage requires some support.

The new Industrial Ecosystems Approach was afterwards presented by Mark NICKLAS, from DG GROW; and the liaison between the Horizon Europe programme and the S3 interregional partnerships was presented by DG RTD.

In relation with the specific Agri-food sector, Alexia Rouby, from DG Agri presented the new role of the agri-food sector in the context of the Green Deal and the From Farm to Fork Strategy (F2F).

Finally, during the Q&A session, Valentina Pinna, from DG REGIO, shared new information regarding the I3, and announced that the first calls of this instrument will be launched probably in the third quarter of 2021.

The PRIMA Secretariat organised an Info Day presenting calls topics, rules of participation and steps to apply for.

The event informed to potential applicants about the call for proposals stemming from the I3 Instrument - Strand 2b, about Capacity Building in Less Developed Regions.

The Traceability & Big Data experience on raising funds was shared.