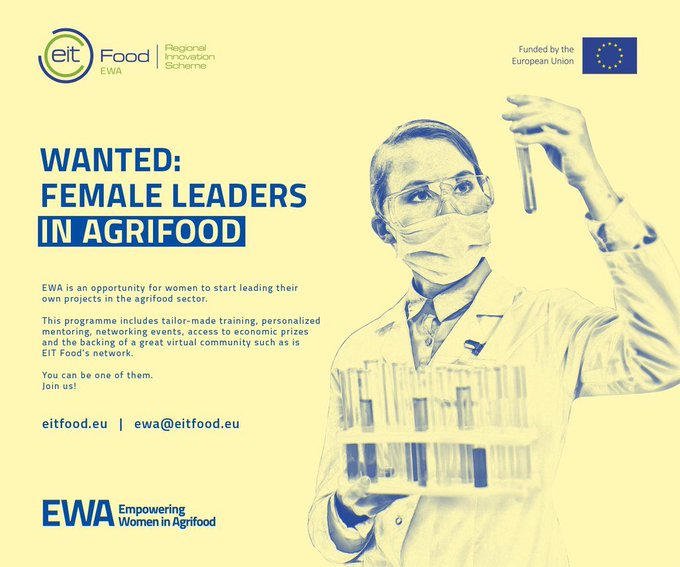 The European organization EIT Food has once again launched the Empowering Women in Agrifood (EWA) programme to support projects in this sector founded by women in 8 countries: Bulgary, Greece, Lietuva, Poland, Portugal, Romania, Spain and Turkey.

The aim of the EWA programme is to close the current gender gap because women hardly have a leadership role in this sector. For six months, selected women are continously  supported to advance their projects, with specific online training and personalised business mentoring. In addition, they will access investors, business angels and corporatives to take their businesses to the next level. Beneficiaries will have the chance to win up to 10,000 euros.

Application is open until June 13.

Even though there are more women (52%) than men in Europe, female entrepreneurs represent only a third of the self-employed in the EU. Due to some different factors entrepreneurship is currently a less attractive option for women than for men. This is worse when we move to rural areas and agrifood businesses according to the latest statistics published by the European Statiscal Office. In 2016, women accounted for 28% of the top positions in agricultural and livestock farms in the European Union, with a remarkable low rate amongst women from RIS regions.

Furthermore, the lack of representation of women in rural areas not only affects entrepreneurship, women face obstacles that prevent them from fully developing and choosing positions of responsibility in rural companies. Therefore, and specially in rural areas, female creativity and entrepreneurial potential are an under-exploited source of economic growth that should be further explored. The European Commission is working with EU countries to overcome these challenges and encourage more women to start their own companies.

The Regional Council of Oulu organized a one-day event for their regional companies and other organisations operating in the food sector in order to promote the use of ICT.